Cords of many colours

I love the Superlon threads by ‘Beadsmith’ Made especially for micro macramé, they come in a vast array of colours. I now have quite a selection, but how typical that I ran low on the very shade of orange that I needed to complete my latest piece. I trawled the web and eventually had to order it from the USA. But the necklace is complete at last and has already been reserved by a customer. I have gained some new skills during the making of it, most importantly I know next time to allow way more thread than I think I’ll need! 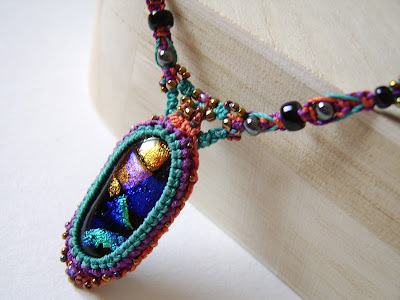 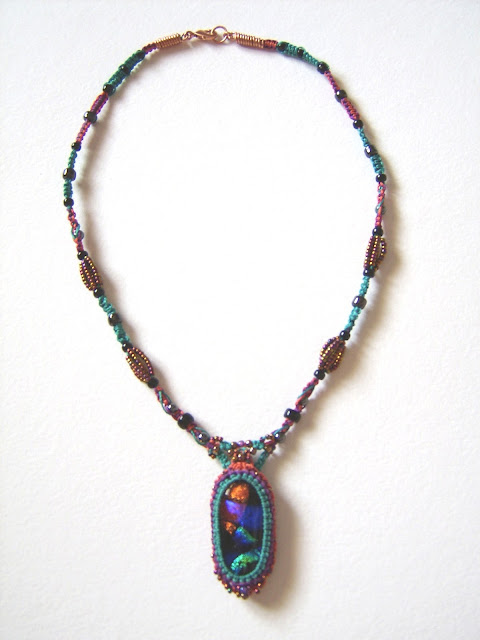 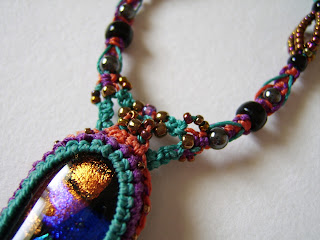 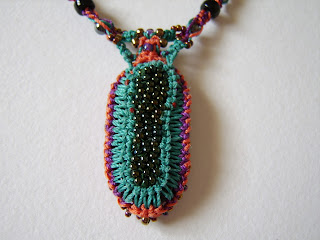 I’ve been on a bit of a personal mission to perfect the technique of making a woven bezel around a cabochon. I’m pleased with the neat finish on this one – I wanted a tidy finish to the back so I added a woven seed bead section.

As well as making the piece durable this seed beading  also has the effect of helping the front to retain it’s shape, enabling me to show as much of the beautiful cabochon as possible. Another advantage is that I can tuck thread ends within this section. I always feel a little nervous about just using a knot and then sealing the end by melting – I want my piece to be really sturdy without any risk of unravelling. I really enjoyed the challenge of making the chain with it’s colour changes along the length. Now I can’t wait to start a new piece – using Superlon threads. I’m thinking lime green and navy blue cords, with a cabochon centrepiece in those colours.
Posted by Valerie Jones at Monday, August 28, 2017 No comments:

We beady folk get inspired in some funny ways. Mr J and I have been enjoying the athletics on TV in the evenings over the last few days, and I have loved seeing the arial shots of the stadium, all lit up and looking so sculptural. I particularly like the triangle forms of the floodlights.

It occurred to me that the shape of a sports stadium is rather like a woven bezel around a cabochon, which is something I am working hard to master just now. 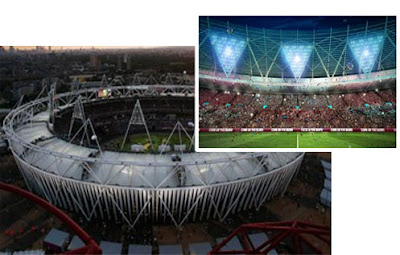 The tricky bit is the join, which has to be as neat as possible. When the woven strip that will surround the cab comes off the macrame board, there are several threads that need to be tied off invisibly so that the front looks tidy. But slowly and surely, I'll have it mastered.  I like to be the tortoise, rather than the hare when I’m learning a new technique, so have spent the last week just practicing, but I’m now working on my actual piece, a beaded micro macramé pendant with a glass cabochon as the centrepiece. 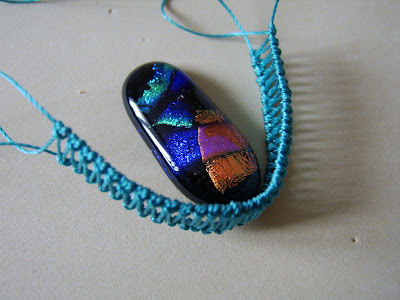 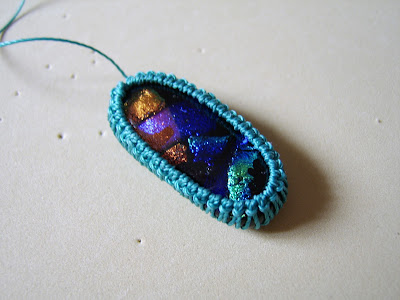 I’m intending to weave in lots of small beads, and the colours will be rust, purple and green with beaded beads incorporated  in the chain. Hopefully the look will be eyecatching, encrusted and lustred. Perfect with autumn clothes.
Posted by Valerie Jones at Sunday, August 13, 2017 No comments: