Rhiannon is a Celtic goddess of the moon and is also said to be the legendary Lady of the Lake who gave the sword Excalibur to King Arthur. Being of fairy descent, she was betrothed to another of her kind. However she fell in love with a mortal named Pwyll. Leaving the world of magic, she became mortal, married Pwyll  and  bore him a son. Her original suitor stole the baby away in vengeance and Rhiannon was accused of killing her own child. She was made to wear a horse collar and sit outside the castle walls, offering to carry any visitor to the castle on her back. She bore her hardships with patience and years later her son returned. Her husband and his people were full of remorse and despite her many years of ill treatment Rhiannon forgave them. For this reason she is a goddess associated with fortitude and forgiveness.


Well I have needed patience to make a jewel inspired by her. It took a few goes before I got the wire twisted into Celtic knotwork and then to end up in the correct position to wire in the side pieces. But it’s coming along nicely and it’s been fun finding out about all the myths and legends associated with Rhiannon. That’s the wonderful thing about jewellery making – you learn something new with everything you create. Apart from learning all about her story, I found a nifty way to keep the wire taut. A cork mat and some macramé pins did the trick. 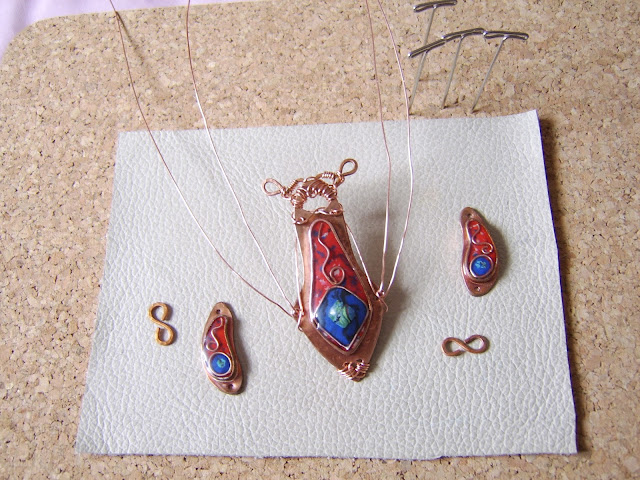 As always when learning a new technique it’s thrown up a lot of ‘what if I did this or that’ sort of ideas, so looking forward to making some more woven pieces using the macramé pins.
Posted by Valerie Jones at Saturday, June 25, 2016