I've had this necklace brewing in my mind's eye for a while. Some time ago I made a beadwork neckpiece inspired by the Greek myth of Persephone. The story goes that Persephone was abducted by Hades and taken to live in the underworld. Later, Persephone was allowed to return to the upper realms, but because she had eaten some pomegranate seeds, she had to return to live in the underworld for some of the year, so it is said, we have our summer and winter seasons.

My original piece was covered in flowers and foliage in summery shades. At the time I wondered if perhaps Persephone ever tired of skipping around in flowers and drifty dresses and was actually pleased to have a change! I imagined her reunited with her darker wardrobe. I imagined too, what a piece of jewellery might look like - all twisty root shapes and quite gothic. This is the result of my musings, it has taken me a while to get round to creating it, but sometimes ideas take root and grow in the dark, then emerge when we are least expecting them. 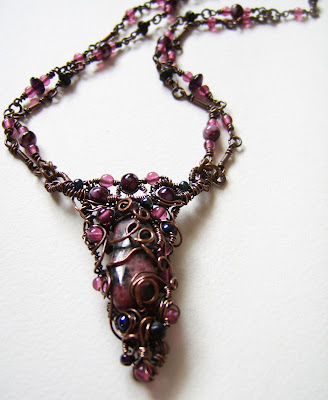 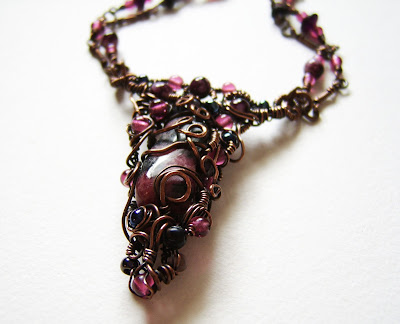 I used a large piece of natural rhodonite which I wrapped and curled round with copper wire. Then I created a double strand chain with more coiled elements and lots of beaded links. Finally, I dipped the whole thing in liver of sulphur to give it a dark patina, and then polished it to reveal some shinier areas. 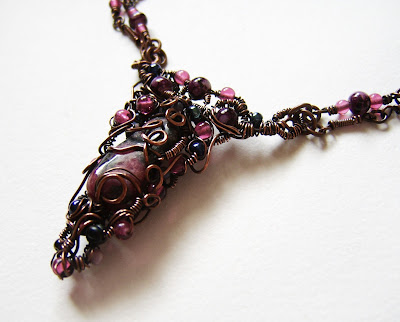