An afternoon of wire wrapping

The necklace in my last blog post went off to a new home today, which left me with a completely bare and tidy beading desk. But not for long! As soon as I came back from the post office I tipped out my box of handmade dichroic glass cabochons. I have loads of them that are just too gorgeous all over to bezel round the edge with seed beads. This one has the most beautiful copper and peacock shades in so I selected some copper wire and settled down for an afternoon of wire wrapping. The copper wire is quite special, the frame is actually square wire and the 3 wrapped areas are done in half round. The technique holds the cab really securely yet means you can see all of it which is just what I wanted. 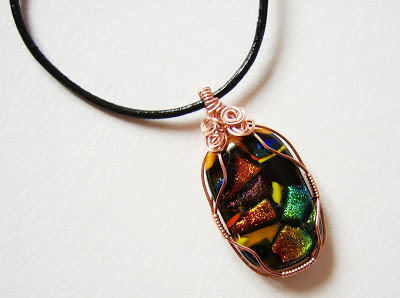 Wire wrapping is quite intense and you have to think quite logically and work out what order to do the wraps in. I'll be trying my hand at a different kind of wirework tomorrow, round a lovely big tumbled gemstone nugget. I think I may patinate the wire on tomorrows project with special antiquing solution...... ooh get me getting all silversmithy. It's only a matter of time before I succumb to the temptations of the blowtorch (don't tell my husband he knows how accident prone I am!)

I've had great fun with the new tools I got last week. I've been playing around with some wireworking and macramé and have made a necklace incorporating both techniques. I'm delighted with the quality of the set of 7 pliers that came with my wire wrapping kit. It proves that you really do get what you pay for and I shall never use cheap pliers again. In particular the flat nose pliers were so fine that it made easy work of doing tight coils of wire flat up against the gemstone. I'm certainly going to be doing more wirework in the weeks ahead, it combines so well with gemstones. This piece was unusual for me, hardly a tiny seed bead in it apart from the detailing on the pendant. It does you good to bead out of your old comfort zone sometimes. 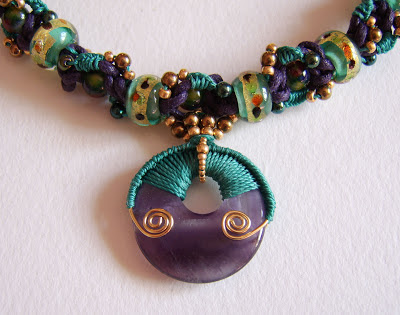 ﻿﻿
Aside from the jewellery making it's been a funny old week. I had my routine breast screening (horrible) and the plumber had to come and replace kitchen mixer tap (expensive). On the plus side there was a lovely family get-together as it is my birthday this week. No barbecue due to the weather, but warming stew and Norfolk dumplings followed by a bracing walk across the fields with doggy and 8 year old great nephew. How ancient it feels to be a great auntie!

Hope you all have a great weekend.
Val

You wouldn’t think being a full time jewellery designer could be so tiring would you. After all, sitting at home stringing a few beads together is soooo relaxing – right? Wrong! It’s exhausting and I found I was ready to take a break for a few days. Working on a big bead embroidered project often leaves me feeling fulfilled creatively, but tired after looking at all those tiny seed beads. It’s gone off to a new home already which makes me even happier. 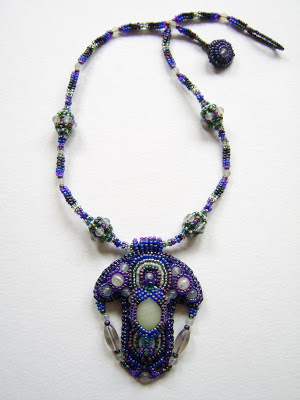 As I mentioned last week, I’m keen to improve and expand my jewellery making skills and last week the postman arrived with some very interesting parcels containing some new materials and equipment. A wire wrapping kit from Manchester Minerals will get me up to speed with some wireworking skills. I’ve some lovely gemstones that are just crying out for some artsy wire wrapping and maybe some leather cord. 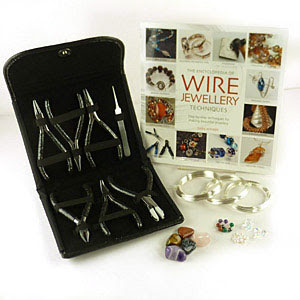 Which brings me on to the subject of knots. So far the only knot I’ve used is a simple larks head one to suspend a gemstone donut. But there is so much more to do with cord and leather than that. For ages now I’ve hankered after a knotting board, but being hard to come by and rather expensive, I’ve not succumbed to the temptation. At last though one came up on ebay and the listing also included loads of micro macramé threads, waxed linen and leather thongs. The DVD that came with it is really good and I learned a lot from watching it. I have some fabulous big flat ceramic beads with large holes and I plan to create a fancy knotted cord out of some of the red leather thong that was part of my ebay job lot. 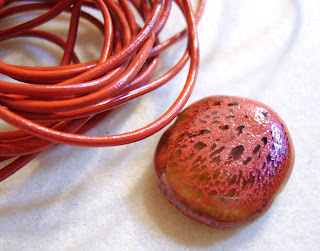 As this was meant to be my week off I decided to make something just for myself, which in common with many jewellery makers, is something I seldom seem to get round to doing. Also in my ebay job lot were two boxes of lovely beads and charms, I was drawn straight away to these square ones. They needed a bold approach I thought so I’ve threaded them with leather strips and plain silver beads. 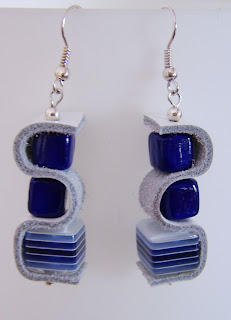 When summer finally puts in a reappearance I shall wear them with jeans and a simple tee. Chic and stylish though I do say so myself – and husband likes them too so they must be OK!
Posted by Valerie Jones at Friday, May 17, 2013 No comments:

Giving myself an annual review

I’ve never been much of a one for making new year resolutions in January, when it’s cold and miserable. As my birthday is in May I always like to give myself a kind of ‘Annual Review’ especially in terms of where my jewellery making skills are headed. I always regarded my Annual Review with some trepidation when I was working as a Graphic Designer. It always seemed to involve being given some very tough objectives to achieve in the year ahead. One year my lovely boss at the time gave me a very enjoyable objective, I was allowed to take an afternoon once a month for my own personal and creative development and head off to a gallery, museum or bookshop to browse! How I looked forward to those few brief hours…. and how much more willingly I tackled the more serious targets I was given as a result. A spoonful of sugar and all that.


I’ve taken the plunge and stepped out of the ‘rat race’ but I find that I still need targets and deadlines to fire me up and keep me on my toes. Creativity thrives on challenges! So with this in mind I’m having a good think about what new techniques I want to learn in the months ahead. There are two things I’m keen to try – micro macramé and wire wrapping. I feel that these will expand my possibilities and will sit well with my existing beadworking skills. I also need to use some of my beautiful glass cabochons using a technique that does not cover too much of them, as a woven beaded bezel is apt to do. So I have a stack of books and instructional DVDs at the ready so that I can expand my jewellery making repertoire.
My latest bead embroidered piece is heading towards completion. I have the cord to finish weaving then a button and loop closure to make before adding the bail. I’m really pleased with the way it has turned out. Purple seems to accentuate the pale jade, aventurine and fluorite beads well. Now that I look at it closely, it seems to me that I must have been influenced by all the macrame books I've been browsing through. This piece has become quite three dimensionsal and knotty looking, especially in the area where the central stone of pale jade sits. 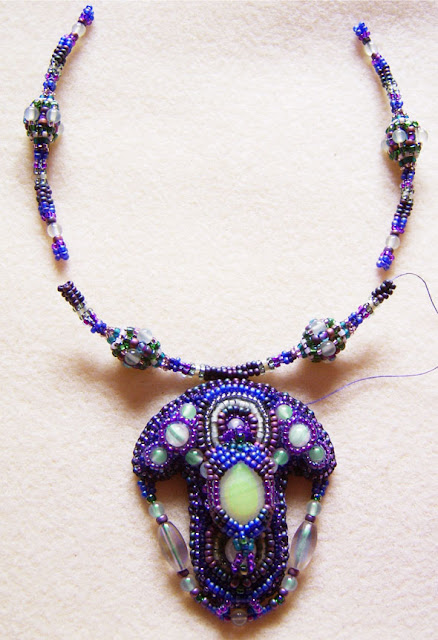